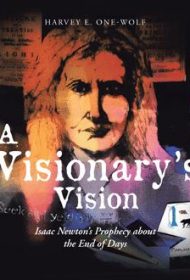 For the last 400 years, the struggle between two distinct worldviews, one scientific, the other religious, has caused much division in the modern understanding of the world. In A Visionary’s Vision, Harvey E. One-Wolf looks to explore—through words and intriguing artwork—this divide while challenging science’s “hubristic” opinion of God as false and irrelevant.

Mixing metaphysics, history, and scripture, the author looks to Isaac Newton as a paradigm for the open-minded, faith-filled intellectual needed in our contemporary world of social and cultural turmoil. “Newton sought knowledge and truth from the originator of the universe through the holy scriptures,” the author writes. This expansive intellect and faith, One-Wolf posits, allowed Newton to make informed predictions not only on the nature of gravity, for instance, but also possibly about the end of the world.

One-Wolf explores Christian eschatology and what he sees as the genuine ongoing battle between angels and demons. He also discusses the works of Leibnitz and Einstein, including their discoveries of calculus and the nature of gravity. These passages are intriguing, and the artwork throughout—a collection of drawings, collage, and lettering—is eye-catching and adds a metaphysical element that is both artistic and contemplative.

Unfortunately, at 80 pages, the book feels slight, given the large topic it tackles. The text seems underdeveloped and in need of more research. According to One-Wolf, Newton’s intense study of the Bible and science led him to predict Armageddon would happen in the 21st century. While the author uses numerous Scripture quotes to back up this thesis, he falls short on providing concrete evidence of Newton’s belief. According to some estimates, the legendary scientist wrote more than a million words on the Bible and God. Few of those words are mentioned or cited in the text.

Without such substantial first-hand evidence from Newton’s work, the author’s ideas in A Visionary’s Vision feel incomplete and unsubstantiated, resulting in a disappointing read for those interested in the subject.