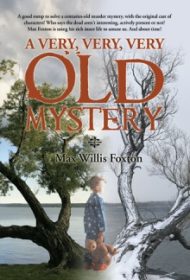 n Max Willis Foxton’s novel, a young boy encounters the supernatural and journeys to the past to help save his family.

Ten-year-old Jeremiah Morris has traveled with his family to his grandparents’ country estate in England. One rainy afternoon, he discovers nine generations of dead ancestors living in the attic. They are caught between heaven and earth as phantoms until they can clear the name of their relative, Edgar Wadsworth, who was falsely accused of murder and hung in 1745. Saint Peter won’t let Edgar through the heavenly gates until the family proves his innocence.

With the help of his spitfire “nine-greats-grandmother” Leila, the Countess of Poppycock, and other phantom ancestors, Jeremiah embarks on a time traveling adventure to 18th century England to prove Edgar’s innocence. But Jeremiah soon suspects the true culprit may be closer to the family than anyone realizes, a revelation that puts him in grave danger.

Foxton aims to appeal to children and adults with this story, according to the book jacket, but the former is the most likely audience. He shows respect for these readers by illuminating elevated concepts in an organic way through young Jeremiah’s questions. For example, Jeremiah asks how a plane flies, and his father describes wing shape and air pressure, delivering a short, useful lesson in physics. Among other things, we learn about different styles of architecture, historical hygiene habits, and vocabulary words like “avant-garde.”

However, Foxton takes a while to get into the meat of the story, and the actual historical crime-solving only occupies a slim portion of the book. Extended conversations between several characters re-explaining past events to one another slow the pace. Foxton’s complicated mechanics of time travel could also benefit from simplification.

Ultimately, the story’s not-too-spooky mystery, easily digestible educational lessons, and earnest, moral characters help make up for a sluggish plot and moments of awkward dialogue. While the flaws will deter some, readers interested in historical fiction may enjoy this story.