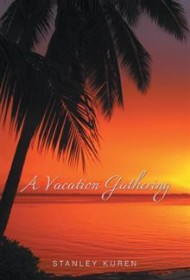 In Stanley Kuren’s novel, a wild vacation to Florida with a group of friends irrevocably changes the lives of everyone involved for generations to come.

The story begins in irreverent style as a cast of over-the-top characters (including a bumbling alcoholic named Chucky and his trouble-prone friend The Dickey) get together with friends and family for epic misadventures down South. The storyline begins with a subtle undertone of fantasy: A painting of an eight-foot rabbit that Chucky bought earlier in his life had a note attached to it referring to “three mystic journeys” he would take. As the novel progresses, the plot becomes increasingly fantastical.

Unfortunately, this contemporary fantasy is hampered by several flaws. First and foremost, a multitude of grammatical errors make reading frustrating. The author commonly forgets to use closing quotation marks when writing dialogue; misspellings and other issues abound.

Secondly, the plot lacks any real story arc. There is no ebb and flow to this narrative; it just rambles, one scene merging into another.

A third issue is the offensive stereotypes the author employs. Two main characters (Sheriff Bubba Butt and Big Mama) are black, and although no other Southern characters have discernible dialects, the author portrays these two with almost incomprehensible speech patterns, as in: “Dat mat be a while…Coz it doan look lak anabuddy’s goin’ anawhea’ too soon.” Italian characters Guido and Uncle Vinnie are straight out of a bad mobster movie.

Finally, the humor is base — jokes centered around defecation, in particular, abound — and will be offputting to many.

In novels such as this—road-trip stories in mainstream fiction and quest novels in fantasy—there is a clear direction and point to the story: some kind of existential or spiritual revelation. Unfortunately, any type of illumination to be found here is lost amid the many issues mentioned, creating an unsatisfying reading experience overall.