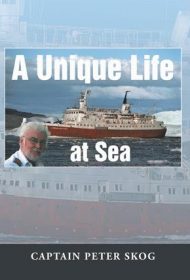 Finnish born and raised in Sweden, Skog longed to travel the world. At 16, he found work on a motor tanker sailing from Sweden to Odessa and was initiated into the harshness of life at sea, but also learned about the strong bonds between crew members. Skog continued to enlist on other cargo ships, sailing around the world, then enrolling in Sweden’s nautical academy to become a master mariner. Soon after, in 1973, he was asked to serve as third captain on the nimble first-of-its-kind cruise ship, the Lindblad Explorer and later become the ship’s captain (by then, it was called the Explorer).

Skog sailed countless times to Antarctica and other remote areas, carrying scientists, artists, and celebrities, among other passengers. He experienced adventures and ordeals, including groundings, swimming with sharks, 30-meter high waves, encounters with remote peoples, and navigating a narrow passage in Antarctica that came to be called Skog Passage.

It’s exciting to read about Skog’s daring as a young man, and his writing is honest and forthcoming, whether recounting the “perfect storm” or the famous personalities who sailed on his ship. When he’s fully immersed in these experiences, he takes readers there with visceral, immediate details.

Unfortunately, too often, he “tells” rather than “shows” the action, sometimes inserting tangential or excessive historical information, distracting readers from the story. Sometimes, he foretells an outcome before detailing the action, giving away the ending and weakening the narrative.

Additionally, chapters oscillate back and forth in time, confusing the sense of how events interconnect. Skog also repeats information, such as reiterating details about his life and of the Lindblad Explorer.

Despite these flaws, A Unique Life at Sea captures a rarified, and entitled, era of early cruise travel. Readers interested in a time before over-tourism and mass travel will find intriguing moments here.