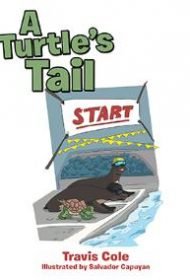 A turtle who loves swimming defies convention and competes against seals in an animal version of the Olympics, in Travis Cole’s children’s picture book A Turtle’s Tail.

Thirteen years later, Splash gets a chance to swim on his high school team and uses his tail to give him an extra advantage. Despite his success in that race, other swimmers refuse to believe a turtle can swim competitively, damaging Splash’s confidence. But when an older seal aids Splash in regaining his self-assurance and motivation, the turtle eventually gets his chance at the Animalypics. After the last race is over—and Splash has survived a painful tail injury—he learns that his mentoring seal was the same one he’d watched on television years before.

Splash is an inspiring and thoroughly likeable character, and Cole’s book demonstrates several positive messages, including the value of pushing yourself to improve and never discounting your ability to overcome obstacles. Unfortunately, the narrative is likely to prove daunting to young readers. At 57 pages, the story is far too long, and many two-page spreads are dense, featuring only text, without illustrations.

It’s also hard to imagine any but the most sports-oriented youngsters sticking with the copious details of the various heats in different races recounted here, as in: “To make the USA swim team, Splash would have to race a two-hundred-meter freestyle semifinal against fifteen other swimmers and finish no worse than the top ten times. From there, he would have to swim in the final race, placing in the top five,” and so on.

The illustrations are charming, but the story requires streamlining to offer widespread appeal. As is, the book is most suited to young competitive swimmers, who might find its messages here valuable.