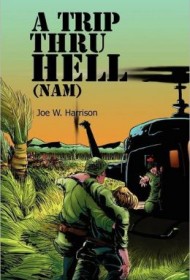 Though Joe W. Harrison left the war in Viet Nam in April of 1968, it has never left him. The 67-year-old author, who currently serves as associate pastor at a cowboy church in Texas, has penned this memoir as a tribute to his fellow soldiers, living and dead.

His story begins when he decides to re-enter the army. Previously, he had served three years in Germany and then completed four semesters of college, but was unable to find a job. This time, he is sent to South Viet Nam in March 1967 with the 11th armored cavalry and assigned to set up listening posts for advanced enemy detection. In a single year, he painfully cheats death numerous times–through encounters with a pit viper, giant red ants and leeches; getting shot by a sniper; crashing in a helicopter while serving as a door gunner; and being thrown a live baby with a grenade attached to it by a random woman as he stood on a street corner. Throughout his experiences, he learns the slim divide between life and death often depends solely on the selfless acts of others.

This is a tale simply told, with numerous spelling and punctuation errors and lacking in any literary devices. That being said, it does have truth on its side, as Harrison offers a detailed, honest and sometimes gruesome yet passionate account of his intimate war experiences. The story is compelling in its “you are there” mode of writing and shows clearly what bravery in combat means.

The book most likely would hold appeal for other soldiers and veterans and is not likely to have a shelf life in bookstores or libraries due to its need for better organization, copy editing and pertinent details that would lend better context to his story.