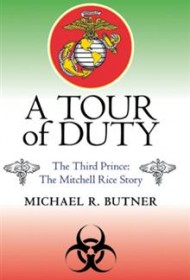 A Marine Corps sniper turned doctor must moonlight as the CIA’s secret weapon when a mad scientist threatens the world with a biological weapon in this highly speculative thriller by physician Michael R. Butner.

A Tour of Duty is a disorienting mix of genres. The first third reads like a Vietnam War drama in the vein of Tim O’Brien or Karl Marlantes. Mitch Rice is the shooter in a two-man sniper team operating from a fire base in the Vietnamese highlands. Rice suffers greatly when his partner is killed and seeks solace from the nuns and a young teacher named Sarah Thornton at a Catholic church. Returning home, Rice enrolls in medical school and meets his future wife. The book soon takes a turn into thriller territory as he also becomes embroiled with a mad chemist, Jacob Beel Wade. Rice manages to save Wade from a lab cyanide accident but Wade’s wife dies, sending the already unstable chemist into a delusional revenge fantasy involving Rice and the CIA.

Sarah, meanwhile, ends up working for a general who leads black ops for the CIA. They recruit Rice to tail the chemist Wade to the 1972 Munich Olympics, where Wade tries to defect (it’s not specified to which country) and Rice manages to capture him during the chaos of the massacre. Then Rice finishes medical school and starts practice (in an overly long dramatization of the process) – only to be called to save the day when Wade resurfaces in an ominous way.

While the story is engaging at times, the novel never crystallizes out of the many genres from which it draws inspiration. The good doctor makes for an intriguing white-hat hero, but melodramatic dialogue and implausible spycraft create a credibility gap in A Tour of Duty that is difficult to bridge. As a result, this book is unlikely to appeal to a wide audience.