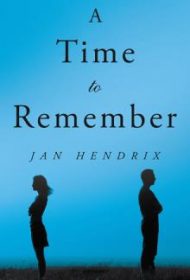 Poignant and uniquely crafted, A Time to Remember chronicles the lives of two people separated by an ocean as they find themselves before they can return to find one another.

Mark Bergner and Lauren Werner’s relationship ended quickly on a chilly, rainy day in Germany, 1951. They decided together that a romance between an American soldier of Jewish descent and a young German girl was doomed. Mark returns to the United States, while Lauren’s life, education, and career continues in Germany.

The story chronicles Lauren and Mark’s individual journeys, shifting between two completely different narratives. This should be jarring, but the author somehow manages a seamless transition. The book’s first half focuses on Mark’s career and life as he starts as a common laborer in his family’s successful New York construction company, eventually taking over as CEO. Lauren appears in the first half but begins to shine in the second, after her job as a reporter and photographer places her in the midst of the Algerian war. The timeline is linear, but the occasional leaps in time can sometimes seem startling.

Both main characters, as well as their supporting cast, are fully-realized and engaging. But, it’s the story, or rather the two stories, that are truly compelling. Both characters grow in positive ways as they encounter intrigue, excitement, and even violence in their chosen paths, but find moments of quiet and introspection, as well. In a dramatic climax, Mark embarks on an adventure to find his lost love, although his quest, which contains surprising events and twists, is unfortunately brief.

Because Mark and Lauren’s love is only in their minds until the final pages, it’s hard to classify this as a romance; literary or historical fiction is more appropriate. While more time with the main characters in the same location would have been desirable, the author’s unexpected, yet adept creation of two separate journeys makes for an enjoyable, satisfying read.