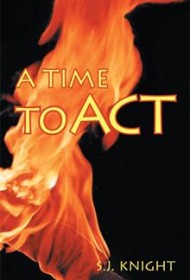 The Apostle Paul is one of the most important and intriguing figures in Christian history. Author S.J. Knight takes on this icon in the historical novel A Time to Act.

The author forewarns readers in the introduction that this is a work of fiction, so those looking for pinpoint accuracy are well-advised to set rigorous expectations aside. Knight uses historical and biblical fact as background in order to conjecture about how this historical figure came to be the man he was.

Paul (born Sh’aul) of Tarsus is unique in that he is a Jew with Roman citizenship and has studied in the Greek philosophical method. His father sends him to Jerusalem to study with one of the foremost rabbis, so young Sh’aul knows the Law inside and out. When he encounters an upstart group following the Nazarene desert preacher Jeshua, supposed to have risen from the dead, he begins to chase this rabble down in order to persecute them for not following the Law. But after a miraculous encounter on a desert road, he not only supports the preacher, but makes it his mission to spread Jeshua’s philosophy throughout the known world.

At 600+ pages, this book seems challenging at first glance, but it’s written in an accessible style that should appeal to older youth and adults. The main character is highly empathetic and readers will relate to his likeable portrait.

The story would, perhaps, be improved by more character development. Paul moves from scene to scene relatively quickly, and the narrative falls short of illuminating why and how he developed his way of thinking and acting. At times, the dialogue can feel stilted, and because Knight adds characters and events to biblical accounts, those well versed in Christian theology may prefer sticking to more traditional biographical works.

Despite such issues, however, readers willing to accept the premise of historical fact embellished in a fictional account will likely find this an engaging read overall.