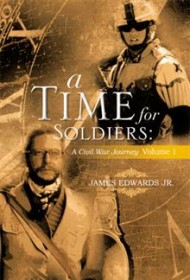 The author offers the perspectives of numerous characters to flesh out this generally engaging fictional journey through the origins and early battles of the American Civil War.

The first voice is that of an aging Union veteran, moved by the country’s entry into the First World War to remind fellow citizens that “war is a chronic condition, and stupid.” This he does by recalling the first year of his war, a year of blundering, incompetent generalship and useless slaughter, all to very little end save for the powerful bonds formed between soldiers.

The next is that of a Northern reporter given permission to travel through the South, allowing him to write perceptively on the framing of the Confederate Constitution, witness the firing on Fort Sumter, and interview Jefferson Davis. Unfortunately, for some reason his reporting is cast more like that of a television newsman than of a 19th century journalist, a peculiar device that unnecessarily detracts from the historical details he records.

Others, however, sound more true to their time. They include an anti-slavery minister from South Carolina (“It always comes down to slavery. We should have gotten rid of it while we could…”), a young unionist about to cast his first vote for president, and a cub reporter from Tennessee who persuades President Davis to give him a pass to cover Confederate units in the Western Theater of operations.

What all these witnesses to history accomplish, despite occasional editing flaws (as when people stay at “motels” long before even the concept existed) is provide an informative and textured look at a watershed moment in the American story. Fortunately, by calling the book “Volume 1,” the author implies that he doesn’t intend for their voices to remain silent for long.