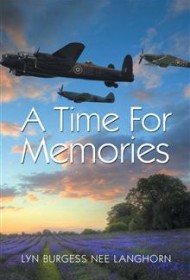 In A Time for Memories, Lyn Burgess Nee Langhorn blends the nostalgia associated with pastoral England and the horrors of WWII, offering a novel that, at its core, is a love story focusing on the inner strength the main characters need to survive.

The novel begins as Rosy finds refuge in an air raid shelter while on her way to the London hospital where she works as a nurse. Part of her job is to meet the incoming trains carrying wounded military passengers. However, her delay gives her time to think about her husband, Derek, who is missing in action. With no evident transition, the narrative then recounts how Rosy met Derek, a young Air Force officer on leave. They immediately fall in love and marry, knowing that once the honeymoon (described in detail) ends, he will fly into enemy territory.

The plot is one we’ve seen often before, which may leave readers wishing for a fresh approach. Meanwhile, other issues hamper the narrative. The dialogue is stilted and often confusing; it’s not always clear who is speaking. For example: “She looked down and straightened the papers and blushed, ‘Yes, sir, I would love to have a coffee with you good Sister. When is your next break?’ ‘In about an hour, sir.’”

Further contributing to the sense of disorder: the incongruous passage of time; haphazard setting changes ranging from rural England to a German SS camp, and a multitude of characters, including family members, French Resistance participants and a contingent of hospital doctors and nurses. One character, Paul Tannis, inexplicably assumes a prominent role simply because he’s at the right place when needed; his connection to Derek, and later Rosy, is one of many contrived elements impacting the story’s believability.

Ultimately, the novel falters under the weight of its flaws. A lack of focus and originality and plentiful typos and grammatical errors make it difficult to appreciate the author’s effort.