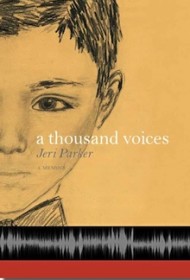 This poignant memoir by a former Utah schoolteacher, about the wild, magnetic, deaf child who became crucial to her life, tugs the heartstrings and reveals the tangled emotional needs of both characters. It unfolds in two kinds of original language: the boy’s impaired, yet poetic speech and the writer’s yearning, bittersweet recollections.

In 1964, Jeri Parker met a poor Mexican-American kid named Carlos Louis Salazar in Ogden, Utah. “I more or less stole him,” she writes. “He was the son I wanted, and I did get him for a while.” Parker was 24, Carlos 10 when he began spending more time with the author than at his impoverished home. “He was more otherworldly than childlike,” she exults, “. . . Peter Pan on a string, whipped skyward.”

Their on-off relationship endured for two decades, through Carlos’s brilliant, playful, sometimes troubled school years, his later bouts with violence, drugs and early fatherhood, and into his final days in a hospital bed, where he lay dying from kidney failure.

The beautifully designed book is illustrated with Carlos’s heartbreaking childhood drawings (an overstuffed school bus, a mother eagle glaring past her baby) and animated by the deaf boy’s desperate insights. “Throw me away,“ the lonely, maladjusted boy once pled. Thanks to Parker’s keen memory and devotion, he comes off as a truly tragic figure.

One major reservation: while the author celebrates “the lighthouse within” the doomed boy, she’s not candid about herself. Vague boyfriends come and go. What must have been an odd relationship with Carlos’s struggling biological mother remains murky. And Parker is evasive about the root of her Carlos-obsession: on page 18, she hints at “losing” a son of her own (infant death? miscarriage? abortion?), then drops the subject; later, she calls herself “a parody of a mother” but says no more.

Still, this extraordinary memoir makes for compulsive reading, and Parker’s vow to always remember “my dark-eyed boy” and to “take care of his spirit” will move the stoniest heart.