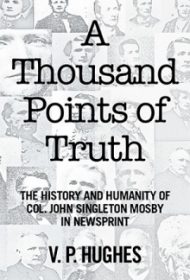 Hughes’ title references the “halftone” process by which photographs first appeared in newspapers, using dots of various sizes. Hughes believes that, like those old prints, the image of Mosby has become blurred; she seeks to sharpen that perception.

An educated Virginian, Mosby was practicing law when the Civil War erupted, and quickly enlisted. Serving under J.E.B. Stuart and then commanding his own cavalry unit, Mosby was in a military group called “Rangers” whose looser guidelines allowed them to employ guerilla tactics. Mosby and his raiders became a menace to the Union armies, an inspiration to the Southern cause.

Hughes’ tome combines hundreds of print references to Mosby and excerpts from his own memoirs interspersed with Hughes’ strongly held assertions. They mainly focus on Mosby’s post-war activities, when he curiously allied himself with the restored union. He campaigned for one-time enemy President Ulysses Grant and received several political appointments based on his newfound affiliation as a Republican.

Some biographers have declined to examine Mosby’s later life and others have shown it in a negative light. By contrast, Hughes paints Mosby in glowing tones, opining that he was a pragmatist both during and after the war.

Hughes is a highly intelligent wordsmith, although her personal sentiments at times diminish the book’s historical credibility. Too, some of the quoted material is repetitious (e.g. she includes many, very similar notices of Mosby’s death), and the nearly 800-page book could have benefitted from a judicious trimming. Also, as an historical text, the volume cries out for an index and bibliography, which would have increased its value as a reference work.

Nonetheless, this is a copious collection indicating great effort on Hughes’ part and providing a wide-reaching resource for those who admire the deeds of Colonel Mosby.