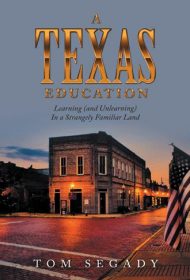 Tom Segady’s autobiography, A Texas Education, is a contemplative study of a young man’s journey that begins with a teenage desire to visit the sunny climes of Southern California but eventually leads to 30 years as a professor at a Texas university.

With backpack firmly hoisted on shoulder, and visions of a Kerouac-like experience, the author embarks on his journey at age 18. As he hitchhikes to California, he mistakenly ends up in Texas—a part of the country he’s determined not to revisit after his initial encounters with suspicious locals who greet disheveled outsiders with a wary eye.

Ironically, after he finally reaches his ultimate destination, fate deals him an unexpected hand: Armed with a fresh Ph.D., he gets his first teaching position – back in Texas. The remainder of the book follows him after that point, giving readers insight into what he learns about life looking through his students’ eyes in Texas, on his journeys as far away as India, and in his research in Germany.

Segady is a polished storyteller, and his laid-back style is particularly engaging. His broad education is fully on display as he casually drops quotes from sources as diverse as Nietzsche and Tolstoy. In addition, readers are treated to an appended list of books Segady considers insightful, by authors ranging from Sun Tzu to Dr. Seuss.

This book shines, not just because the story reads more like a novel than a list of names, dates, and places, but also because of the nuggets of wisdom Segady drops along the way. “For some the end of college, however premature, is the beginning of a real education,” he writes in one instance. In another, he observes that an educator is formally evaluated at the end of a term, yet informally evaluated after every lecture, “which might be several times each day.”

For armchair travelers, this book is one to savor. It also just might serve as inspiration for one’s own memorable journey.