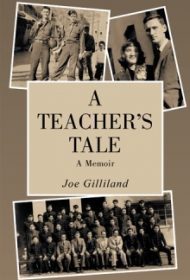 This detailed, eventful memoir tells the story of Joe Gilliland’s education, from his early childhood to his accepting a job teaching at Texas’ Lee College. In between, he served in Europe during WWII and afterward in Korea and taught English in Japan. Along the way, through both formal study and casual reading, he pursued his interests in literature and ideas, building a true liberal arts education.

Growing up in small-town Texas during the Great Depression, Gilliland showed his intelligence and unorthodox personality in first grade, correcting his classmates’ grammatical errors. In high school, he formed the Texas Order of Science with other scientifically talented young men, and in college, he took a wide range of courses, without much thought to a career. He frequently jokes that he would be perfectly happy as a “perennial undergraduate.”

This memoir is a tribute to both teachers and books. Gilliland explains how his anthropology professor, “Dr. Mac,” taught him to think critically by making provocative statements ( “education through irritation,” he says). He also lovingly discusses the books he read, from the mix of sophisticated and “trashy” titles in the Armed Services Editions sent overseas to soldiers, to works of criticism by Alfred Kazin and others. Whether guiding fellow servicemen through an anthology on satire, or aiding a Japanese professor with a translation of Eugene O’Neil’s plays, his experiences helped him become a teacher.

Gilliland tells his life story in an easy, relaxed style. Still, at times the sheer volume (600-plus pages) seems daunting and the amount of detail can slow the pacing. In addition, occasional copyediting errors, such as extra periods and missing words, can be distracting. The book ends with a strangely casual signing off that is more of a shrug than the bang readers would expect.

Even so, there’s much to enjoy here. A Teacher’s Tale should particularly appeal to those interested in education and the liberal arts, as well as fellow lovers of literature.