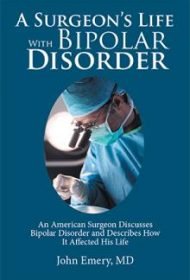 Much has been written recently about bipolar disorder, but few books portray the lives of professionals whose mental state can harm or heal, paving the way for Dr. John Emery’s A Surgeon’s Life with Bipolar Disorder.

Emery, a retired urologist and surgeon diagnosed with bipolar disorder at age 39, promises a two-part book: first, a section on the disease, then his personal experience with it. Indeed, Chapter 1 begins with a primer on the disorder, including descriptions of treatments and examples of the manic phase—for example, the shirtless man directing traffic with a bow and arrow at his feet, unaware of how bizarre his behavior appears—along with potential negative consequences. Of note are Emery’s recollections of how he learned to recognize and take responsibility for his mood swings.  Luckily for the doctor and his patients, he had both the foresight and means to stop working each time he lapsed into a hypomanic or depressive episode.

Sadly, the book deteriorates after this chapter. Rather than offering a window into his struggle, it morphs into a mundane “this happened, then this” diary spanning boyhood to college and beyond and continuing for 160 pages without a single mention of the author’s bipolar disorder. Toward the end, he finally returns to the topic, but by then some readers will have grown weary of waiting.

Additionally, the writing is replete with typographical errors and is surprisingly flat, often “telling” rather than “showing.” For example, while recounting his stint as a drafted medic in Vietnam, he writes: “We would visit each of the villages once a week. We provided very basic outpatient care for the civilians there” without elaboration.

Emery’s book is best suited as a personal memento for family and friends. General readers hoping for insight into bipolar disorder will be disappointed, with the exception of the sections bookending the memoir. A Surgeon’s Life misses an opportunity to focus on life-saving observations the author is uniquely qualified to share.