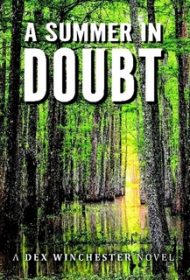 Dex Winchester’s new novel, which seems aimed at young adults, follows three teenage boys as they investigate a mystery and find themselves in peril.

The summer before starting high school, Dante and his two best friends, Anthony and Miles, are looking forward to a lazy time fishing in the Louisiana bayou and flirting with their neighbor, Amanda, the prettiest girl in school. But their chance for a peaceful summer vanishes when, on their first-ever unsupervised trip to the bayou, they let curiosity get the better of them and stumble upon a home invasion. The two menacing criminals spot the boys and give chase, but they barely manage to escape.

Afraid their parents will ground them, the boys at first say nothing to anyone. But the perpetrators come after them and, failing to harm them physically, set out to frame them for the ongoing series of robberies. When the boys’ attempts to point the police in the right direction fail, they confide in some of their town’s quirky residents and conspire to set a trap for the villains.

A Summer in Doubt is told from Dante’s point of view, and Winchester skillfully captures the voice of a young teen: slightly rebellious and eager for independence, but with one foot still in the goofiness of childhood. For instance, readers will easily identify with Dante when he remarks, “I’m not sure why I thought people falling was funny, but I definitely did.” The novel’s plot twists, oddball adult characters and atmospheric setting are also likely to engage its readers.

Overall, Winchester’s tale should appeal to tweens and young teens eager for a contemporary spin on the classic Hardy Boys stories and to adults looking for exciting but “clean” reading for the youngsters in their lives.