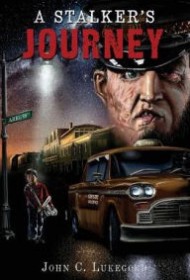 A Stalker’s Journey depicts a series of violent incidents perpetrated by a sociopath, particularly those involving the offender’s obsession with Ace, a paperboy.

Despite being only 103 pages, this novella covers a large timespan. The opening chapter acts as a prologue, depicting events in 1983 and 1984. The story then jumps to the early 1990s, when Ace is a preteen and his antagonist, Curtis Evan Ware, is a young man. About halfway through the book, the story moves forward 14 years, when Ware is released from prison and returns to again torment Ace, now a young adult.

Ware’s obsession with Ace is curious. At the book’s start, a teenage Ware rips off a drug dealer and is seriously injured in a subsequent car crash. He loses an eye in the accident and is sentenced to a detention facility where he is violently assaulted. One might expect those incidents to inspire Ware’s anger and vengeance.

Instead, the author focuses his character’s wrath on Ace, who first crosses Ware’s path in 1990. Ace is among a group of friends who pelt his car with snowballs. Also, Ace and a friend break into a gardening shack on Ware’s property. This is what leads Ware to repeatedly attack Ace and the boy’s friends.

A Stalker’s Journey suffers greatly from a lack of interior logic; character motivations don’t always make sense and serve to remove readers from the story as they puzzle through events. Awkward dialogue is another issue. On two occasions, Ware yells at Ace melodramatically, “Revenge is mine!” During another encounter, Ace exhorts, “You’re my sworn enemy. I hate you!”

In addition, because it is written as a straightforward recitation of criminal events, the novella never succeeds in building compelling suspense. And although the book appears to have been copyedited and proofread, many words are improperly hyphenated.

Overall, A Stalker’s Journey requires heavy revision in order to appeal to a wide audience.