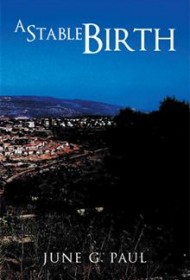 In this slim volume, June G. Paul elaborates on the story of Jesus’ birth, detailing how Mary and Joseph react to angel appearances, how they tell an innkeeper of the news, and how the shepherds in nearby fields react to an angelic voice. The back cover copy states her intention to share “the stability of faith residing in the characters of Mary, Joseph, and the Innkeeper.”

Readers cannot doubt Paul’s sincerity as she adds imagination and flair to the basic biblical account, relating touching details such as: “Once the contraction loosened its grip on her, Mary loosened her grip on Joseph’s hand.” Her settings and conversations weave historical explanations into the story, such as why many shepherds—as opposed to only a few—were watching their flocks the night Jesus was born. “It was rare for shepherds to be able to catch the thieves single handedly, so the owners learned that having multiple shepherds for their flocks was in their best interest.”

However, the book suffers from some mechanical and stylistic issues. Punctuation is often missing and much-needed dialogue is indicated by italics only, such as: “Turning back toward the innkeeper Joseph replied, Yes! Yes she is hungry! Of course [sic] we both are.” Changes in speakers are not indicated by indentation, making reading confusing at times. “Mary looked at Joseph. That is a very generous offer, isn’t it, Joseph? Joseph looked at the innkeeper’s wife and smiled in thanksgiving. It is very generous, Mary.”

In addition, although adding to an historical story may provide some clarity to the initial tale, this fictional account does not build in climax, resolve conflict or incorporate a theme, as compelling literature should; effective historical fiction requires much more than the simple elaboration provided here.

All told, readers new to the Christmas story may find Paul’s account helpful in filling in some general parts of the overall picture of Jesus’ birth. Those hoping to find great depth and drama, however, are likely to be disappointed.