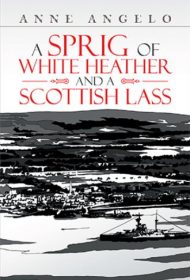 In A Sprig of White Heather and a Scottish Lass, Anne Angelo describes her upbringing in rural Scotland and subsequent move to France.

While at a 1910 motor rally in France, Scottish mechanical engineer Joe Angelo meets Beatrice, a young wealthy French woman, whom he soon marries. When her family observes his overarching interest in their assets, they cut the couple off from their money. Filled with anger, Joe returns with his bride to his dreary life in the Scottish Highlands.

Over the years, Joe’s fury at having to provide for his family, which grows to include Anne and her two siblings, continues, and he becomes verbally and physically abusive. Determined to be rid of Angelo so he’ll have one less mouth to feed, Joe seeks to marry her off when she’s a young woman and even tampers with her car’s brakes to try to kill her. To escape him, Angelo accepts a job as a governess in France to “become a new person.”

Angelo doesn’t regard herself as just a victim; in fact, she credits her father for motivating her to learn about money. She believes that “What we are is due almost entirely to our stars….the parents we’re born to, the place and time we’re born in; and the circumstances we’re born into…” In considering matters of fate, social status, and women’s rights, Angelo elevates her account from a simple chronicle to one that raises thought-provoking questions.

Angelo’s smooth writing is neither overly sentimental nor bitter and makes for quick reading. However, the book feels unfinished when it ends without reaching events that gave rise to circumstances referenced in the opening chapter. In fact, readers can look forward to following her story in a sequel, obliquely referenced in a prefatory note.

Despite the unfinished ending, this is an engrossing memoir of a young Scottish woman’s coming of age amidst family turmoil and economic hardship in the early decades of the 20th century.