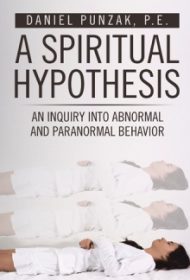 Daniel Punzak’s ambitious tome, A Spiritual Hypothesis, addresses a wide range of subjects, including mental illness, spirituality, near death experiences and paranormal phenomena. The concept of the soul in Native American, Eastern and Judeo-Christian philosophies plays a central role in how the author links these disparate topics into a single hypothesis: that “more than one spiritual form resides within the physical body.”

Punzak’s ultimate goal is to understand “abnormal behavior and to attempt to correct… various mental illnesses and criminal behavior.” While touching on mood disorders and schizophrenia, the mental illness Punzak primarily focuses on is dissociative identity disorder. He includes a history of DID’s conceptual evolution and case studies and suggests that more therapists utilize the concept of an “inner self helper” (the best of the spirit forms within a patient) in treating their patients. He dispenses with the field of medical psychiatry in a few pages, positing that “only a spiritual theory of the world, consciousness, and human behavior can account for the real world of the abnormal and paranormal.”

Punzak’s background is engineering, rather than psychology or theology, as readers might expect. Although the author has researched his subject matter industriously and includes an extensive bibliography and index, his writing lacks a first-hand perspective of working in a therapeutic context and is unlikely to be seriously considered within that field.

It’s more likely to interest spiritual seekers and those fascinated by accounts of near death and mystical experiences. The author includes numerous stories, including that of a man who “died” of pneumonia and then interacted with living people, other spirits and a “man of light” who guided him through transcendental realms until Ritchie reawakened in his own body. Within Punzak’s broad view of science and philosophy, a smaller gem of a book could be extracted for a more specific audience.

Ultimately, the book’s large scope may impede its ability to reach readers. Those who have extensive knowledge of psychology or theology will find his exploration of the topics accurate but incomplete, whereas average readers are likely to be intimidated by this book’s breadth. Nonetheless, this work weaves together an interesting mix of spirituality and psychic phenomena, and the clarity of Punzak’s writing reveals the inner workings of a passionate, smart, inquisitive mind.