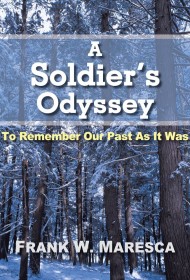 New Jersey resident Frank W. Maresca was just 18 when he joined the army in 1944 to fight for the United States during World War II. This big-as-a-doorstop book, part of the Veterans History Project for the National Registry Service, documents his personal story from basic training to fighting the Germans in the Battle of the Bulge in Belgium. It no doubt reflects the experiences of many of the approximate 16 million who served.

Maresca served with F. Company, 2nd Battalion, 289th Regiment, 75th Division, beginning as a buck private at Camp Breckinridge, Ky. His account covers every aspect of his training—learning to use grenades, bazookas, and more¬—and also shares the spirited hijinks of buddies there and stories of cantankerous generals. With encyclopedic detail, Maresca then describes the long, difficult ship ride to England, including a multipage foul account of seasickness, terrible sleeping quarters and often inedible food.

Conditions get no better while slogging across France on foot and by boxcar while battling frostbite. When combat begins, the author spares nothing in sharing “you are there” moments describing the company’s movements, physical suffering, deaths, and his own painful wounding. Maresca draws information not only from his own memories, but from official U.S. records and many soldiers’ personal letters, diaries and photos. Enhancing the book are detailed maps and illustrations, photos, artwork, newspaper accounts, cartoons, lists of soldiers’ names, WWII statistics, and even follow-up pages covering the time some veterans returned to the Bulge sector in 2004 to retrace the areas where they fought.

Despite occasional word misuse and copyediting errors, Maresca has done a masterful job in bringing the soldiers’ WWII experience alive, highlighting all the good, bad, and occasionally offensive situations that existed. At 900+ pages, few will read his book word for word. But it will be of particular interest to all who’ve served, and to those seeking to understand the truths of war, unembellished by Hollywood directors.