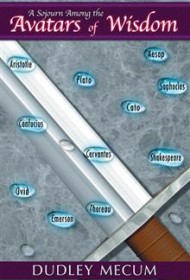 Dudley Mecum has relatively humble narrative aspirations in his fantasy novel A Sojourn Among the Avatars of Wisdom. In lieu of an imagined universe with its own complex history, mythology and geography, the author offers a world comprising the most basic elements of the genre. While wizards, dragons and magic exist here, they don’t carry complicated backstories and elaborate subtext.

After an abortive mission to the International Space Station, career astronaut and payload specialist Chris Cole visits a Renaissance Fair back on Earth. What starts as a lark to relieve the stress of the failed space mission, however, turns into something very different. Cole meets up with wizards, bards and monsters straight out of a fairy tale and is quickly caught up in a fight against primal forces of evil. In addition to facing his own shortcomings and fears, Cole must fight a very literal manifestation of malevolence, and with the help of magical allies, he shifts from exploring the stars to living out a tale from the mists of myth.

Written in the present tense and offering prose marked by some fancy turns of phrase, the story is escapism in its purest form: The tale kicks off with a protagonist entrenched in modern technology and science and veers into a fantasy world where medieval rules apply. Cole doesn’t linger for long in his imagined world.  Mecum’s focus is on his character’s quest to overcome his own shortcomings in an environment that leaves much to the reader’s imagination.

It’s a charming narrative exercise, and Mecum succeeds in telling a story that’s both direct and heartfelt. The plot is simplistic, and the ending far from surprising, but the author manages to embed some genuinely valuable life lessons in the short tale.

The structure may be too basic for fans of fantasy sagas that offer rich and complicated mythologies, but this slim tome is a charming diversion for anyone looking for some casual adventure.