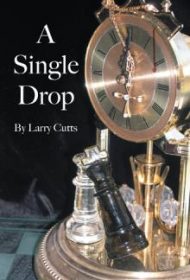 Larry Cutts’ new novel A Single Drop follows an unlikely lawbreaker whose troubles only increase when he gets away with the perfect crime.

Sterling is an accountant who prides himself on maintaining complete control over his life. For instance, when his wife files for divorce, Sterling copes by devising a budget. Soon thereafter, Sterling promises to help his gambling-addicted father repay his debt to a violent gangster. When his efforts to raise the money come up dry, Sterling devises a drastic plan: robbing one of his clients. True to form, Sterling plans his crime meticulously, from the break-in to the alibi.

His watertight alibi for the burglary is no help, however, when he finds himself accused of another crime that occurred later that night at the same scene. Now in the crosshairs of the Russian mafia as well as law enforcement, Sterling must rely on his beautiful lawyer to get him out of trouble in one piece.

Approximately the first half of A Single Drop is engaging and highly entertaining. The novel begins with a hilarious scene in which a younger Sterling, almost in spite of himself, saves the life of the president of the United States. From there, Cutts does a masterful job introducing Sterling and making him sympathetic despite his neuroses.

However, when Sterling and his lawyer wind up on the run, the novel takes a sharp downhill turn in quality. The writing grows bland, and the story unfolds largely through often-wooden dialogue. Its resolution is clever, but readers will not necessarily push through the book’s lackluster second half to reach it.

Cutts has done an excellent job developing his protagonist and setting up the novel’s plot. If A Single Drop’s second half could be revised to extend those virtues, it would have much greater appeal to readers.