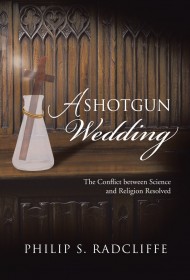 This short nonfiction work seeks to unite the worlds of science and religion, or at least seriously question why so many view them as inherently incompatible. Philip Radcliffe builds his case thoughtfully and uses his own beliefs to help clarify a complicated topic. The resulting book is worth exploring.

A Shotgun Wedding uses critical thinking to advance an argument in favor of allowing scientific discoveries a place within a Biblical worldview. Radcliffe establishes a scientific baseline, then introduces theories of dialectics, randomness and free will in various sectors of society before looking at the views of popular atheists Christopher Hitchens, Richard Dawkins and Sam Harris. If this sounds like heady stuff, it is. While clearly and meticulously well-written, this is by no means easy or light material.

Rather than making a case for the existence of God, Radcliffe concludes that rigid interpretations of scripture that discount scientific discovery are holding back modern Christians from a great source of wonder. He writes, “I am disturbed by a waning church that seems to be focused on an ancient God rather than a current God manifest in His new miracles.” At the same time, he’s wary of scientific researchers who reject religion in a conformist fashion.

Given the entrenched beliefs on both sides of this issue, it’s hard to say whether this book will change any minds; nevertheless, readers who are interested in the intersections of faith and science will appreciate the quality of thought and expression on display here.