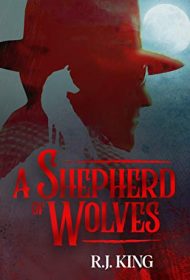 R.J. King’s A Shepherd of Wolves is a crime drama that explores the disparate lives of a serial killer and the detective determined to catch him, as well as the choices they’ve made that lead their paths to cross in their hometown of St. Anna, South Carolina.

Edmund Glass is considered “odd” by nearly everyone he’s ever met. Ostracized by his peers at a young age, sexually exploited by an emotionally distant mother and struggling to reconcile his sexuality, Edmund longs for meaningful connection. Unfortunately, his sociopathic tendencies and proclivity for cannibalism make relationships difficult at best.

As an African American child growing up in the 1960s’ South, Detective Sergeant Raymond Wright experienced racism and injustice firsthand. Raised with his mentally challenged brother in an abusive home, Raymond decides that if no one else will save them, he will. As an adult, he channels that resolve into police work. When a serial killer rears his ugly head, Raymond is determined to bring him to justice.

Rather than the usual cat-and-mouse game expected in crime novels, A Shepherd of Wolves is an exploration of “why?” The story’s strength lies in the characters. Compelling and three-dimensional, with distinct voices and personalities, they’re eminently readable.

Unfortunately, the story is replete with distracting typos, repetitive descriptions, grammatical errors and dropped words. And the ending is virtually non-existent.

The novel opens with a scene in which a nameless grandfather interacts with his young grandson. Neither are mentioned again until—just when the detective is about to get his man— the author abruptly returns to the long-forgotten grandfather and child. The grandchild tells his grandfather he heard about a killer in the woods, and asks for reassurance that he’s safe. The grandfather obliges, and they go to bed, closing the story.

A Shepherd of Wolves has some fine moments, but it’s hard to forgive this inexplicable and misguided move. As a result, readers will likely find the story disappointing.