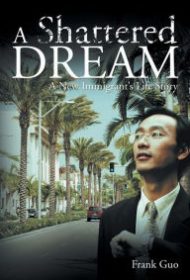 Frank Guo’s novel A Shattered Dream chronicles a young Chinese teacher’s dream to achieve a better life through higher education in the U.S.

Dan Liu arrives in the U.S. with a group of Chinese university leaders aiming to establish a student exchange program. But when the rest of the delegation returns home, Liu heads to Austin, Texas, where he has worked previously on a research project and will do so again. His real goal is to obtain his green card, a master’s degree in engineering and to ultimately bring his wife and daughter to the U.S.

The protagonist’s dream takes him from Texas to Canada and back to the U.S. He undertakes a series of menial jobs, including dishwashing and maintenance work, making new friends and contacts as he goes. Meanwhile, back in China his wife ridicules him for his inability to advance more quickly.

Guo does a skillful job of portraying the frustration and disappointment of immigrants in the U.S. But, unfortunately, the book has numerous problems. Guo delivers too much unnecessary detail, relating the steps of the most mundane daily chores, such as settling into his room or showering. Additionally, the numerous characters can be difficult to follow, and some share very similar names, such as Dan and Daniel, Jenny and Jennifer. In one scene, Mark becomes Martin.

There are instances of awkward writing, as well. These may be due to the fact that English is a second language for Guo, who grew up in China (for example, describing people in D.C., he writes that: “ their appearance was obviously more gorgeous than that of the people they had seen in the New York City”).

Guo clearly thought this story through and understands it well, but a tighter plot, and better editing would improve it greatly. As is, its appeal will most likely be limited to those with a keen interest in the immigration experience.