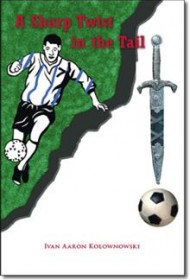 For much of the first half of this unusual novel, readers may justifiably wonder where, exactly, the main action will take place. Clearly it will not be in Africa, where the book opens. Nor in the cell of the condemned serial killer in England or the concentration camp in Nazi Germany. But what about the soccer pitch? Or the small English fishing village? Or the ancient, crumbling abbey-turned-orphanage?

And whose story are we supposed to follow? Is it the sick mercenary, fleeing the borders of Zimbabwe? The drunken Irish priest? The orphaned boy with a past, the fishing boat captain with a secret, the mysterious sports journalist–or is it someone else?

The confusion is nowhere eased by such grammatical “flourishes” as random apostrophes, misplaced quotation marks, words with either missing or added letters, and bewildering sentences that sometimes aren’t really sentences at all. For example: “Doubting his generous but on the back of his cigarette packet.”

There is some redemption about halfway through, though, when the novel becomes a murder mystery. Amidst all the drinking, the sexually dissatisfied spouses, homosexual encounters, male bonding, and intense soccer matches, we learn that another serial killer is on the loose. While the book’s structure remains almost as misshapen as before, now there is a sudden increase in dramatic tension, the book displays occasional purpose, and the characters begin interacting in ways that make a certain sense.

With tighter editing and more attention paid to limiting the frequent randomness, the result could have been a taught, fast-paced thriller. As it is, however, there is just too much that dangles without purpose from the book’s frame for it to hang together as a simple, solid whole.