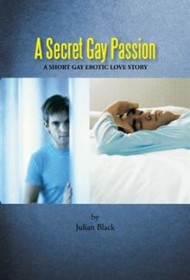 A Secret Gay Passion by Julian Black is at once unusual and conventional. It’s your standard in-the-closet gay boy meets out-of-of-the-closet gay boy and falls in love saga, complete with the emotional upheavals of a closeted lad summoning the courage to tell his working class family about his, well, condition.

The trouble is, the remaining two-thirds of the book don’t contain enough pages to flesh out these characters. They way they are portrayed by author Julian Black, Nicky, Richard and their families are mere chalk outlines. As Gertrude Stein might say: “There’s no there there.” We get the obligatory Daddy issues (mothers embrace their gay sons; fathers throw tantrums) and a cursory sense of the British landscape where the story is set. What we don’t get, most importantly, is a reason to genuinely like the narrator Nicky. He’s a nice enough bloke (though a bit of a wet rag), but his actions are dictated by external forces rather than inner convictions. Yes, he grows over the course of this story, but only because he’s pushed to do so, not compelled to mature of his own accord.

A Secret Gay Passion has its heart in the right place. With more depth – say, another 100 pages — this little box step could have been a waltz.