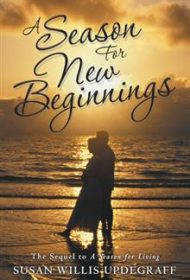 A Season for New Beginnings is the hefty sequel to A Season for Living. True to the historical fiction genre, Updegraff interweaves storytelling and fact to continue the narrative of her protagonist, Atlanta’s Caroline Winthrop.

In this story, Caroline continues pursuing her passion for protecting domestic abuse victims through her nonprofit foundation while her husband Garrett is offered a lucrative position as press secretary to fiery Senator Zell Miller. In the meantime, son John fights his own demons with the help of his stalwart sister Katie, who is in pursuit of her medical degree.

Domestic abuse is clearly a passion for author Susan Updegraff, and she has obviously done her research, using actual information readily available from the Georgia Commission on Family Violence. She also clearly knows the locales she describes (to the point, however, of excessively dropping names of businesses in those areas).

Ultimately though, the book is hampered by numerous flaws. Updegraff clearly has a political agenda and conveys it throughout the story; characters recite long soliloquies critical of liberal policies in government, which will be welcome or bothersome depending on the reader’s political bent.

Uneven pacing also creates issues. Some narrative is very detailed, while other parts move almost too quickly to be credible. (For example, three sets of characters fall very deeply in love in seemingly unbelievable timeframes.) Additionally, dialogue often feels stilted and robotic.  Unlike real conversation, the characters use few contractions, and distinguishing between the players in the story becomes difficult because the dialogue patterns are very similar among all.

Readers who agree with the author’s political views may enjoy the affirmation this story will bring them. And those who like stories set in Atlanta or Raleigh-Durham may appreciate noting familiar sites. At 595 pages, however, this is a weighty chronicle to tackle without some sort of prior connection to the narrative — or a willingness to ignore the novel’s many reading challenges.