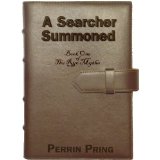 It doesn’t take long for Perrin Pring to sketch out an ambitious and detailed universe in A Searcher Summoned, a dense melding of science fiction and fantasy that looks to be the first entry in an intended series.

Within the first 30 pages, Pring outlines the complex cosmology of an alien world in dizzying detail. Pring describes a universe where “Dream Searchers” can access others’ thoughts through intense meditation. She details different races of alien beings, such as the Eoans and the Afortiori, beings who have evolved over eons with distinct moral bents. In this world, catching a ship to another planet is as pedestrian as taking a Greyhound bus; a race of malevolent beings seek to enslave entire worlds; and the fate of the universe hangs on tracking down a savior through dreams and auras.

When a race called the Afortiori threatens to destroy the universe, a Dream Searcher named Filion is tasked with finding the “Chozen,” a hero named Ryo whose memory has been wiped out and who runs the constant risk of being captured. Filion, a furry alien whose bookish, stay-at-home habits echo those of The Hobbit’s Bilbo Baggins, teams up with a brash, no-nonsense pilot to rescue Ryo and stave off the Afortiori’s plots.

Generally, Pring manages to maintain a fast-paced and exciting dynamic across the book’s 300-plus pages. The moments of excitement and tension, however, come between lengthy explanations and back stories about different races, federations and spaceship construction. Such explanations can feel clunky and academic, as in: “Okkars had originally been water dwelling beings. Due to an apparent climate shift and a sudden and massive introduction of radioactive isotopes into their atmosphere, most okkars had been killed.”

Those additions make for a book that’s perhaps a bit longer than it needs to be, but Pring still manages to maintain a vibrant set of characters and a compelling plot throughout.