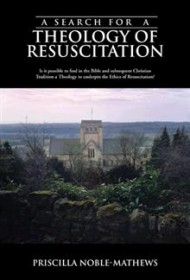 What in Biblical times was considered a miracle–bringing a person back from the dead–is almost a commonplace occurrence today. Such tools as defibrillators and the use of epinephrine to treat cardiac arrest have allowed countless people in modern times to skirt death. But is God being edged out when humans take life into their own hands? And are such life-saving measures ethical or should nature be allowed to take its own course? The essence of such questions is at the center of A Search for a Theology of Resuscitation.

In this book, Priscilla Noble-Mathews, a semi-retired medical practitioner and theological student, examines the Bible, sacred tradition, and the writings of early church fathers in an effort to find a “theology to underpin the ethics of resuscitation.” Starting with the Talmudic practice of blowing air into the nostrils of newborn babies to jump start their lungs and including Jesus’ raising of Lazarus, and Peter and Paul’s teachings on resurrection, the author reaches two conclusions. First, that God is the author of life and death. Second, that bringing someone back to life isn’t an end in itself, but hints to a greater plan ordained by the Almighty; one that doesn’t just affect the person in question, but others as well.

Noble-Mathews reveals a genuine understanding of Christian theology. Her sources are sound and her writing, though sometimes choppy, is solid overall. The book, however, doesn’t fully live up to its potential. What’s missing is a chapter that links her theological research to such modern day issues as CPR, artificial respiration and life support. Without this, the book feels a bit incomplete. Moreover, there are minor copyediting problems–misspelled words and loose phrasing–and a bit of repetition (namely the summaries at the end of each chapter).

Still, even with its flaws, this is a well-researched book and a worthy effort that serves as an intelligent introduction to matters of life and death.