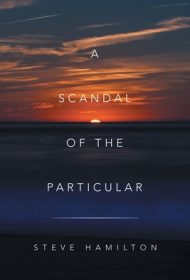 Steve Hamilton’s crime thriller, A Scandal of the Particular, explores gay relationships steeped in a world of drugs and sex and the stigma surrounding AIDS. We follow Hymen Kazan, a middle-aged lawyer, as he becomes tangled in a murky case.

The police discover the dead body of a young man near a safe injection site and later learn that he died of a drug overdose. The case threatens to topple Kazan’s life, as he realizes that his girlfriend and the murder victim share the same lover, Judge Craig Donald Smith. Kazan rushes to solve the crime while simultaneously fighting his own demons of poor self-worth and suicidal thoughts.

Hamilton skillfully evokes both the lonely, existential thoughts of Kazan and the dreary atmosphere of Vancouver. Kazan’s character is distinctive, a man who breaks the archetype of the emotionless detective, and the novel perfectly balances Kazan’s personal struggles with the more significant issues of gay relationships and substance abuse.

The crime thriller aspect, however, takes a back seat, and the book becomes more of a personal exploration of Kazan’s character. The story, gradually examining themes of love and grief, is slow-paced and wordy.

The novel also suffers from a structural issue: Without warning, the narrative’s timeline and point of view often change at the beginning of chapters. This makes for a confusing experience in which readers will find themselves thumbing back through the pages to see where they lost their way.

Additionally, the book depicts female characters in a poor light, most of them portrayed as shallow, sexual figures. Writes the author: “It is mid-morning, and the courthouse is full of older lawyers who wear navy blazers and mismatched ties… And their female counterparts wear skirts that are too tight for their aging misshaped bodies.”

A Scandal of the Particular aims to provide insight into the legal world while also painting a picture of a society filled with corruption. It requires revision, however, to realize its potential.