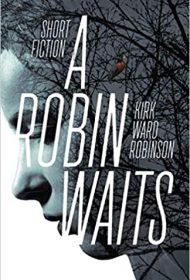 Kirk Ward Robinson’s collection of eight literary short stories explores a variety of themes, many with a modern, even futuristic bent.

“The Word,” for example, examines cancel culture from the viewpoint of an associate professor forced to defend himself against an accusation of using a racist word he personally loathes. As his social media blows up “with the vilest comments,” Robinson offers sly insight: “One revolting word had set this in motion,” he writes, “and yet words as equally revolting were being hurled at him with no sense whatsoever of the irony.”

In “iSight,” the prospect of buying futuristic eyeglasses distracts a young girl’s attention from her college lecture. As she later becomes entranced by the glasses’ power to make her world seem more beautiful, she is confronted by a cruel reality that might have been avoided had she paid attention to the lecture.

The title story looks back in time, focusing on a narrator who finds the diary of a girl reaching puberty in the 1930s. Sixty years later, he reads of the girl’s abuse and the questionable actions she takes to protect herself. “Daddy would tell me to watch the robins in the field, how they stand and wait before they pounce,” she writes in her journal. “…That would be Daddy’s lesson, that a robin waits.”

As they tackle intriguing and relevant issues, the stories draw in readers with compelling writing, believable, fully developed characters and crisp dialogue. While some endings disappoint—a few seem to shy away from taking a stand on the issues raised (such as “No Place for the Young” and “The Word”); others can be heavy handed (as in “iSight”)—readers will enjoy the lead up, and the delicious tension that often builds.

Overall, the stories in A Robin Waits will surely provoke thought, even if they don’t always stick the landing.