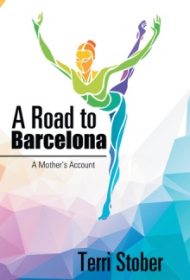 In A Road to Barcelona: A Mother’s Account, Terri Stober writes about her struggle to reconcile feelings and finances while her two daughters shoot for Olympic gold.

In looping, repetitive prose, Stober writes about the decision to let her kids, in middle and high school at the time, leave their California home to live with a host family in Oregon; both were accomplished gymnasts, but local gyms couldn’t train them beyond their current abilities.

The girls adapt well to life on their own, but Stober is bored and lonely without the extensive responsibilities of being a gym parent. Training expenses strain the family’s finances, and when it seems like the girls aren’t pushing for the 1992 Barcelona Olympics as planned, the threat of bringing them home is levied before a compromise is reached in which her younger daughter comes home voluntarily while the oldest continues in gymnastics to try to win a full college scholarship.

The book provides an interesting glimpse into the sacrifices the sport requires. Unfortunately, Stober’s writing is marred by several issues. The prose includes some typos and misused words (“[T]he only retort I could mustard [sic] up was…”). Additionally, the author often chronicles the unimportant minutiae of travel arrangements, while leaving essential gymnastic jargon unexplained, as in: “Both girls were pleased with their successes and accomplishments. Gina would complete a double back and triple full…Troi practiced daily at least 20 round-off entries on beam, her Deltchev’s release on bars was progressing and her giants on bars had improved.” Readers can’t appreciate the achievement if they don’t understand the task.

Parents whose children are considering such a path might find A Road to Barcelona helpful in illustrating how the journey affects the entire family. However, the story requires editing for concision and clarity and more explanation of the sport itself in order for general readers to fully grasp what it means to be an elite competitor.