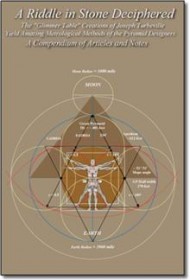 This slim volume gathers a collection of articles by Joseph Turbeville relating to the dimensions of the Great Pyramid and its relationship to many historical mathematical numbers and/or functions. Turbeville has developed a computation process called “Glimmer Tables,” and in many of his articles included here, he ties together these two subjects. The book’s purpose seems to be to convince readers that in the era of the Great Pyramid, there were people quite good at these computations who may have had access to materials prepared by previous generations of great thinkers and computers. While it’s difficult to discern his full meaning, due to scant text explaining the computations included, one infers that this might refer to visits from those inhabiting other places in the universe.

The book also includes several articles about the measurements of modern crop circles in England. The intent, again, appears to be to show that such computation skills may be used by those involved in the creation of these crop circles and that perhaps the process has been passed down for generations.

The computations described are interesting and the accuracy of Turbeville’s mathematical methods is noteworthy. But the book fails to fully explain all of the material presented. More readers would be interested had the author spent time writing text connecting the articles and attempting to convince readers of their significance, as well as of the importance of the Glimmer Tables, etc. What drives Turbeville’s interest in the topic and how does it apply to the life of a physicist or mathematician?

An introductory chapter relating what is to come would also help readers decide whether to spend the significant amount of time necessary to understand the computations and perhaps add to the book’s usefulness with new discoveries of their own. As it stands, the book reads more like an initial draft, rather than an accessible finished product meant for a wide audience.