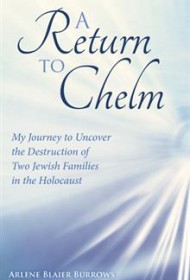 In A Return to Chelm: My Journey to Uncover the Destruction of Two Jewish Families in the Holocaust, clinical psychologist Arlene Blaier Burrows sets out to trace her ancestry and, in the process, discovers the legacy of Chelm, a small, 700-year-old community in southeastern Poland virtually wiped out by the Nazis. Eight of her relatives living there at the outbreak of WWII survived the Holocaust; 72 did not.

Part history lesson, part diary that, at first, reads a lot like a genealogical chart, with full paragraphs about who was related to whom and so on, Burrows’ memoir offers glimpses of family pride, such as her grandmother Bella’s habit of keeping a pot of boiling water on the stove so neighbors wouldn’t suspect that they had no food. But the story really takes off when the author and her brother David travel to Poland to see the Holocaust sites firsthand. There, they visit mass graves, sculptures of heroes executed after refusing to comply with the Nazis, and secret extermination camps where Jews were herded directly from trains into gas chambers. Finally, the siblings arrive in Chelm and walk the streets where their ancestors lived before Hitler’s carnage.

Burrows writes well, and with occasional insights that startle in their profundity: “Seeing smiling faces dressed in the style of the 1930s still disturbs me. I know what was about to happen to their world and they do not. I want to scream at them, ‘Run!’” In Warsaw, as she held documents verifying that her relatives were on the death march from Auschwitz to Gross Rosen, she recalls, “It was as if I were touching their hands.”

The text would perhaps be more readable broken into chapters rather than three long sections. And Burrows devotes only a fleeting moment to her reconciliation with her estranged brother, a sub-story that would have undoubtedly added depth to the book. Nevertheless, A Return to Chelm serves as a useful model for such genealogical projects, providing an illuminating microcosm of the Holocaust and a tribute to those who survived.