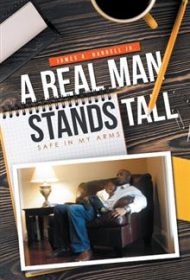 James A. Harrell Jr.’s father abandoned the family when James was a boy. In A Real Man Stands Tall, Harrell writes, “I have seen many young boys, young men, and even grown men shed tears due to their unhealed wounds caused by an estranged father. It is my prayer that something in this book will touch the lives of many fathers and draw them closer to their sons.”

Harrell describes his book as a combination of nonfiction and fiction. The front matter is autobiographical and includes an introduction and a special message for mothers. The main text is separated into four “seasons,” beginning with “Winter.”

“Winter” consists of interviews with the family of an admired pastor. These illustrate a positive male role model. Essays about fatherhood make up “Spring,” while “Summer” consists of Harrell’s poems of abandonment and fatherhood written from various viewpoints (child, father, etc.). Finally, “Fall” holds letters written to fathers, sons, mothers, and God. Harrell wrote these letters from several fictional viewpoints. Yet one, “A Letter to the Grave,” appears to be his true, heartfelt epistle, penned to his father posthumously. He writes, “Although I didn’t cry at your funeral, I cried weeks later…Finally, I have never heard you say these words to me; therefore, I will tell them to you now. In spite of everything, I love you.”

A Real Man Stands Tall is well written and edited. The content is a gripping look into the life of a man who has overcome hardship, yet still bears the scars of his childhood. It’s a story of Harrell’s discovery that God is his true Father, and it’s an admonition for all fathers to take responsibility for the power they have to tear down or build up their children.

While the book’s intent is to encourage male readers to become better men, fathers, and husbands, it will be informative for single mothers, and a healing read for men suffering from paternal abandonment.