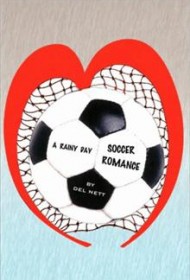 When Stacy left the girls’ soccer league to play for the boys’ league, she didn’t know how difficult it would be. Not only has she gone from being the best player on her team to one of the worst, but she didn’t expect to encounter prejudice from her coach for being a girl. As much as she dislikes her coach, she’s confused about her feelings for his son and her fellow teammate, Brad. As Stacy struggles to prove herself in the boy’s world of high school soccer, she must also decide what she wants for herself.

These are the engaging themes in Del Nett’s young adult novel, A Rainy Day Soccer Romance, a book that examines the teenage experience through a girl who has something to prove. Stacy is a sympathetic character: she wants to be treated as her teammates’ equal, but she also wants to show her feminine side to Brad. Her motivations are good – although her thoughts and reactions don’t always ring true to the character of a teenage girl. For example, Stacy says this about Brad’s mother: “Casually but stylishly dressed, she looks as though she’s as devoted to the care of her well-proportioned body as her home” – not your average teen observation.

Despite this, the novel is enjoyable overall, and readers will appreciate the internal battle that Stacy faces. As she valiantly struggles with her own self-doubt, she makes a fine role model for teenage girls. The romance is sweet, and the book offers noble themes about loyalty and hard work.

(One note: It’s helpful if readers have some basic knowledge of and interest in soccer; otherwise, they might feel lost at times and lose interest in the rather long play-by-play in a soccer scene at the end of the book.)