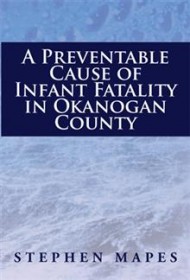 Little is more tragic than the unexpected death of a child. What makes the loss more difficult is finding that the circumstances behind it were fully preventable. The thrust of Stephen Mapes’ book is to lay out details he researched regarding the death of his prematurely born daughter, Mary, after her then-pregnant mother Patricia ingested hazardous wastewater piped into the couple’s new home.

The first 42 pages tell the story of the Mapes family purchasing property in a rural town in eastern Washington. Mapes had tested the drinking water in their home on April 22, 1991 and found it to be sound. Six days later, some people associated with the home sale unexpectedly came out and changed the pipes, switching the water source from a neighbor’s well to a mobile trailer sewage dump facility, the source of the contaminated water, Mapes says.

Mapes believes Mary’s agonizing death at 15 days old was not properly investigated and/or ignored by the local sheriff, prosecutor, judges and the health department. Therefore, he uses the balance of the book (more than 300 pages) to detail what he believes is solid evidence as to the cause of Mary’s death and the people he considers responsible for it. Included are numerous black-and-white photos, corroborating statements, maps, hospital and health department documents, legal and medical definitions and more.

Mapes’ highly personal book is clearly written and appears well-documented. He names specific people in his accusations, however, and these people are not given a voice offering differing points of view, leaving it to readers to ponder why no charges were brought against the alleged perpetrators.

Overall, this sad book about a child’s needless death makes a strong case for questioning people’s actions whenever your property and the lives of family members are involved. However, aside from cautioning those buying rural properties in unfamiliar areas, it isn’t written to appeal to the average reader.