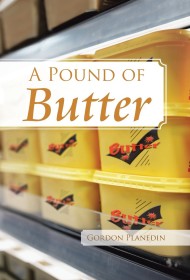 The housing bubble that displaced many people has led to much moralizing and finger-pointing. A Pound of Butter is a revenge fantasy for foreclosure victims, told in the spirit of John Grisham’s A Time to Kill.

When an average looking man pulls out a shotgun and forces his way into an office, the story is off to an action-packed start. Charles Richard Breumer lost his home and his wife to an unfortunate gamble: The couple took out a second mortgage to fund more extravagant vacations, and when the market collapsed they lost their investment. Charlie’s wife apparently died of a broken heart as a result, and now he’s hell-bent on revenge. Two murders and an enormous theft later, he gets a slick lawyer and turns the situation to his advantage, becoming a modern-day folk hero a la Robin Hood.

The problems here are numerous. Among them: Charlie takes no responsibility for his bad investment, blaming his problems on everyone else and solving them violently, yet he’s the hero of the novel. Law enforcement professionals are treated like stooges, and the ease with which Charlie pulls off his crimes is difficult to believe.

The confused, improperly punctuated and ungrammatical writing style makes none of this easy to ascertain: “It provided the chance for people to see that he was just a poor individual like any of them who having been bilked out of his hard earned money, and who had been driven by circumstances to try to recover his money and bring about a moral justice into the game for everyone.” At best it’s hard to follow, at worst closer to mind-boggling.

Author Gordon Planedin has a worthy idea here, but he needs to flesh out the characters, retool the plot, and clarify the writing significantly to draw readers in. For now, A Pound of Butter is best left on ice.