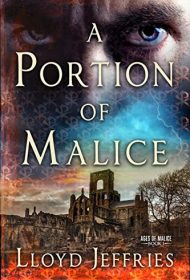 Lloyd Jeffries’ first installment in his Ages of Malice saga is a fusion of arcane thriller and apocalyptic fiction that follows a Pulitzer Prize-winning journalist as he becomes entangled in a potentially world-ending conflict between immortals.

Although Emery Merrick has won two Pulitzer Prizes, his personal life is in shambles. After drug and alcohol abuse led to him losing his prestigious job at the Times and his pregnant wife, who leaves him, Merrick is living in a slummy apartment in upstate New York preparing to commit suicide. With the gun pointed at his temple, a giant of a man knocks on his door with a lucrative job offer: to write the biography of Thaddeus Drake, an international peacemaker revered throughout the world.

With no other options, Merrick accepts, only to find out that Drake is actually Cain from the Old Testament, an almost 6,000-year old immortal bent on ultimately ruling all of earth’s inhabitants. After killing his brother, Cain—the world’s first murderer—was punished by God by being forced to “endure”: to walk the earth for eternity. During the time of Christ, Cain found two other immortals who were seemingly cursed by God: Longinus, the giant Roman legionnaire who wielded the pike that killed Christ; and Igneus (aka “The Jew”), who slapped Christ as He bore the cross towards Golgotha. Both men are helping Cain towards his goal of usurping God.

Merrick, initially highly skeptical, soon becomes a believer when he realizes the depth and scope of Cain’s meticulously plotted scheme.
Strong writing, well-developed characters, relentless pacing, and a deftly plotted storyline make this an enjoyable read. Merrick in particular is an endearing and identifiable everyman of sorts—trying to understand a reality that is suddenly far beyond his comprehension.

And while the conclusion isn’t exactly satisfying—more of a respite before Book II—fans of authors like Dan Brown should enjoy this unique read, an audacious reimagining of Biblical myth, with a twist.