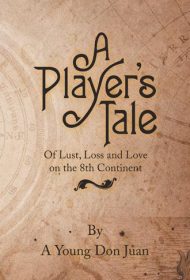 Written anonymously by A Young Don Juan who claims to be a member of “Hollywood Royalty,” this memoir relates the existential musings of a man as he seeks to understand himself through the lens of his copious sexual encounters.

Ultimately, but not without angst and doubt (“would I be inclined to look outside at neighboring pastures?”), Juan finds oneness and love as he commits himself to Elle and at last arrives at the 8th Continent.

This rare, uncensored glimpse into the intimate life of a celebrity—albeit anonymously—feels raw and genuine, infused with a vulnerability that appeals to the voyeur in all of us. But the narrative suffers from an oddly formal and self-conscious writing style. Juan’s overuse of alliteration, italics and metaphor becomes distracting. And sentences such as: “…every facet, phase, face, dimension, depth, dream….in its fluid forms of morphic magnificence” feel pretentious and contrived. Meaning is often lost in a quagmire of wordiness: “Reflecting on my quarter life, I was imbued with hope for things to come, dreams caked upon melting bread in the torrential rains.”

Juan states that he has chosen a nom de plume for the sake of candor and to render his tale “more universal.” However, while sex is elemental to the human condition, Juan’s excesses are unlikely to represent a universal experience. Nevertheless, readers undaunted by the author’s garrulous prose will be rewarded with a glimpse into how a member of the Hollywood elite indulged—and seemingly tamed—his immense sexual desires.