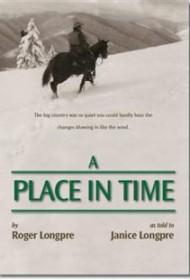 A Place In Time is steeped in beauty. Its setting on Petty Creek in the high-country forests of northwestern Montana inspires awe; the time, envy. As a boy, Roger Longpre shared the sparsely settled mountainsides with the local tribal people who set up tepees there every fall and took him on their elk hunts; by the time he was grown, the region had gone through successive transformations as a logging center and, finally, a playground for wealthy white businessmen.

Longpre’s relatives were French immigrants recently enough arrived that, when he was deposited at the age of 6 for a dreadful and mercifully brief stint in a Catholic boarding school, he spoke almost no English. That unhappy experience was a rare cloud over an otherwise-sunny childhood. In addition to his companions in the Indian hunting camps, Longpre’s childhood friends were the ranch hands, loggers and hunters who eked a living from Petty Creek’s hard-won abundance.

The Longpres successfully raised cattle until brucellosis wiped out their herd, then turned to sheep until the wool market plunged. Roger, by then a teenager, took a friend up on his suggestion that he make a living doing what he did best — hunting. For years, his outfitting business held its own financially and enriched Longpre’s memoir with tales of memorable easterners like Gator, who liked whiskey, chewing tobacco, and the warmth of a stove-heated wall-tent more than the actual hunt, and happily went home with elk that Longpre had shot.

Such tales are reason enough to read this memoir. The writing is another. Its lyrical descriptions stop short of excess, and the book’s pace is as sure and steady as that of Longpre’s favorite horse, Happy. Longpre’s obvious love for Petty Creek and the people and animals he knew there stops short of sentimentality, and he shrugs aside its crushing hardships by focusing on the rewards of his remarkable time there. “I know now that there’s a time and a place for everything,” he writes. “I was given my place just in time, and I’m a lucky man.” Readers will feel equally lucky to share in his story.