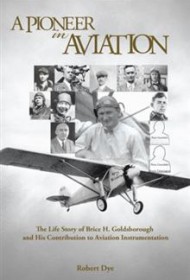 Robert Dye’s book, based on family documents about his great-uncle Brice Goldsborough, profiles a pioneering aviation inventor and businessman. Little-known except to dedicated “propeller heads,” Goldsborough’s career at his Pioneer Instrument Company brought him into contact with many recognized names in flight: Clyde Cessna, Walter Beech, Igor Sikorsky, and Charles Lindbergh — and a startup airline called Pan American.

Growing up in Iowa, Goldsborough showed an early interest in weather, meteorology, and machinery. His curiosity about “how things worked” led him to enlist in the Navy to study electricity and the new wireless communication technology. After setting up radio stations in China and Haiti, he left the Navy to pursue opportunities in commercial aviation.

Aviation technology was then as new and exciting a field as the Internet was perhaps 20 years ago. In 1919, the U.S. Post Office wanted to be able to fly mail cross-country, even in bad weather. Goldsborough and his partner developed the Earth Indicator Compass, which provided pilots a more stable reference to keep planes on course. (Previously, aircraft often used repurposed automobile instrumentation or followed railroad tracks!)

In 1926, his company-sponsored plane easily won the Ford Reliability Tour, a competition to demonstrate that aircraft could fly great distances. The next year, he was approached by an unknown former airmail pilot named Charles Lindbergh to design instrumentation for The Spirit of St. Louis. (When space limitations prevented mounting a compass properly, Goldsborough calmly asked a lady visitor for a compact mirror and affixed it to the panel with chewing gum, so Lindbergh could read the numbers easily.)

Much of the book deals with Goldsborough family matters, which is of limited interest to others. The writing is often overly folksy, imagined dialogue, and there are copyediting problems and minor errors. However, the last 85 pages chronicle a terrifying attempted ocean crossing and remind us how very dangerous flight once was. Despite the book’s flaws, aviation history buffs will appreciate this title.