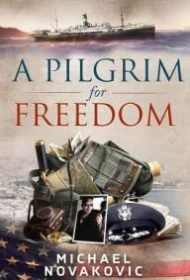 So much has been written about WWII and the refugees who fled its terrors, it’s hard to imagine any author adding significantly to the picture. But Michael Novakovic’s memoir, A Pilgrim For Freedom, offers a child’s unique perspective on the lesser-known conflicts of Eastern Europe, with its many warring regional factions.

The book covers Novakovic’s life to the present, but it’s the first section, about his wartime childhood, that’s the most compelling. Here, Novakovic recounts how his family’s privileged lifestyle in Croatia—his father was director of the Serbian National Bank— was upended in 1941 when the Axis powers invaded the country. Shifting political currents made life untenable in his hometown, and in 1942 the family fled to (then) Yugoslavia and on to Italy. They spent four years running from fascists, Croatian revolutionaries, and Nazis, never losing hope of settling in America.

In this part, the author demonstrates a rare ability to recall a child’s feelings. With a boy’s uncontainable glee, he tells how he and his younger brother, Paul, let the air out of enemy vehicle tires, then set fire to a fuel tank, blowing up a truck. At the same time, the author faced hard truths. He witnessed horrific war crimes, including the torture and bayonetting of a friend’s mother, and Novakovic never stoops to inflated prose as he describes the monstrosities committed around him.

The book’s second section recalls the Novakovic family’s eventual arrival in America, the author’s much-awarded military career and successful civilian business, and admirable family life. While this immigrant story is uplifting, the author’s no-nonsense writing style is less engaging here than in earlier passages. This part is also hampered by the fact that much of his military career was in intelligence, which he can’t discuss.

The book’s real power lies in Novakovic’s stories of a childhood on the run. His dramatic boyhood will stay with you, making this a worthy addition to the literature of WWII.