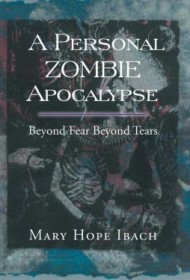 Reading Mary Hope Ibach’s poety and prose collection is a heartbreaking, draining experience. In A Personal Zombie Apocalypse, Ibach documents her struggles with profound emotional disturbance and the horrible isolation that goes with it.

Ibach dedicates the book to her son, who died of an apparent drug overdose at the age of 33. In the prose-poem “Morning of the Mourning,” she writes of the “full blown war that was seething inside of him” and of the moment she found him in the bathroom: “His head rolled back, and to his side…/And he was gone, I knew, because the used needle was laying there on the bathroom floor.” Another piece, an essay, addresses her time spent in what appears to be a mental institution.

Ibach goes to great lengths to express her situation with care, reflection and honesty, writing of drug abuse, drinking, the betrayal of friends and, in the titular poem, voices populating the narrator’s mind. One cannot help but admire her desire to be utterly frank and authentic.

Yet while the emotions are obviously real and raw, the work feels much like an ongoing private journal, without the distillation or density to make it fly as poetry and carefully crafted prose. The wording is often abstract, lacking the emblematic imagery needed to appeal to the reader’s sentience. (For example, in “A Personal Zombie Apocalypse,” she writes: “The very air seemed to move backwards on her and stilled her former reality as she slipped through a wall of vibrations into another reality.”) When she uses metaphor, it often seems confused and unfocused, as in: “Archetypes crumble/like chalk statues/ in a melting/ human museum.” (“Crumbling” and “melting” offer two very different images, making the visual picture difficult to absorb.)

Ibach is clearly striving to facilitate this dangerous, excruciating content with integrity and imagination. But while Personal Zombie is an intriguing account of the narrator’s harrowing ordeal, it requires evolution to fully connect with readers.