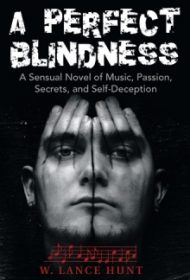 This vivid look at Chicago’s delusion-driven electro-industrial music scene in the late 1980s showcases W. Lance Hunt’s gift for capturing the era’s often foolish dreams and grungy realities, right down to the would-be rock stars’ diet of Triscuits and Cheez Whiz, their fragile egos and the inanity of the photographers, groupies and hangers-on inhabiting the fringes.

Hunt, co-founder of Chicago’s Rudely Elegant Theatre company, portrays a pair of young rockers from Columbus, Ohio, who leave “cowtown” for Chicago’s “Valhalla” and will do anything to make it in the big city. Jonathan Starks is the skinny frontman, keyboardist and songwriter for the band; Scott Marshall is the group’s big, bulky guitarist and control freak, forever at Jonathan’s throat for his reliance on a succession of beautiful muses who nourish his “art” with love and neediness. One of them, the model-agency exec Jennifer, shares billing with Jon and Scott as a narrator. The triple view works well here, particularly as the characters’ dark secrets and motives become apparent.

As the band rises on a fusion of euro-club danceability tinged with post-punk attitude, Hunt’s tireless, Jagermeister-fueled nightcrawlers give us a complete tour of North Side rock clubs in the ’80s—and of their own failings. Scott’s relationship with a childhood friend leads to disaster. Amy (muse number one in Jon’s array) rages in bitterness. And the frontman himself, who doesn’t know insight from self-deception, clings to his hubris: “The unspoken desperation in the eyes of everyone around me were songs they tried to sing, but they needed me to give them voice.” Only Jennifer seems to grasp the friends’ common crisis of identity. “Who we really are hangs someplace between all the stories, suspended in the contradictions.”

The story could do with a healthy excision of repetition and superfluous detail. Nonetheless, it’s smartly written and sharply atmospheric— a worthy (if overlong) addition to the literature of rock n’ roll’s agony and ecstasy.