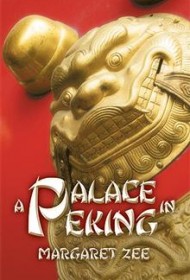 A Palace in Peking is a well-wrought 1930s love story set in the ancient capital of China.

This novel, told in flashback, opens with Daria returning to China in 1948 to search for her lost love. She recalls how, as a rebellious American teenager she was sent overseas to live with her mother’s former employer, an American diplomat, in hopes of tempering her wayward behavior. Upon arrival, she developed a crush on the family’s adult son, David who rightly kept her at arms length.

Circumstances of pre-WWII political unrest caused Daria to mature quickly and David to see her in a different light. With war eminent, David reluctantly returned her to America and joined the war. The story ends back in 1948 with Daria tucking away her memories and beginning her search.

Along with the love story, equal focus is given to pre-WWII Peking and its expat society. One can tell that the author lived in Peking during this era, as the city’s history is woven into the story but is not overpowering; rather, it is used to advance the story and explain character motivation. The settings are beautifully described and evocative (“On carved, lacquered thrones, on tall pillars and high rafters, elaborate gold ornamentation glimmered through thick layers of dust”); the dialogue is appropriate to the era and specific characters; the characters are fully developed, given explanatory back-stories and change as the action unfolds.

There are two minor flaws: a thrice-repeated explanation of a bathroom used for eavesdropping, and a confusing beginning to the Epilogue. These are small distractions. Overall, A Palace in Peking is an enjoyable story, well worth reading. Romance readers will appreciate the love story. General readers will delight in the exquisitely detailed settings of 1930s Peking. And all readers will learn some history without trying.