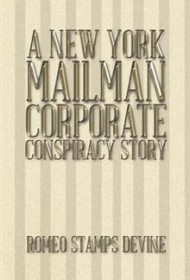 Romeo Stamps Devine was once “a very proud hardworking New York City inter-office mailman,” according to his book’s back cover. In this dramatic story, Devine shows how easily a good job can turn sour.

Devine recounts that as a baby, he was treated surgically for what his parents called “water on the brain” (hydrocephalus). It’s likely that this condition left Devine with unspecified disabilities, making his life in general, and especially his work life, quite challenging.

As he assayed the tasks of mailroom clerk at a law firm, he at first had cordial relations with co-workers. But things changed radically, he writes, when, for reasons unknown, they accused him of having Mafia connections. He is convinced that from that point, in the early 1990s, his co-workers conspired to taunt and harass him, sexually and otherwise. Meanwhile, his personal life was in disarray with court cases involving the women in his life and the care of his infant son. His parents were sometimes supportive, but just as often mocked or maligned him.

Devine’s book describes in painful detail the suffering he experienced. While it has an inspirational quality, the memoir is extremely difficult to read. It is peppered with errors — both spelling and grammar — on every page; a typical sentence provides a sample of both: “And little did he did not know I brought in my electric Taser gun as I reached in my paint [sic] pocket to define myself…” Repetitions abound, particularly the litany of Devine’s grievances. His story is replete with reminders of the offending law firm’s name, which he dubs a “corporate conspiracy company.” Repeated up to five times per page in some sections, such phrases quickly becoming tedious.

Devine’s narrative delivers a stream-of-consciousness style that presents great reading challenges. Still, he has overcome daunting barriers, and those who persevere will sympathize with his troubled attempts to make it on his own without a support system of family, caregivers, or social services.